Students across campus are developing civic leadership skills through environmental projects this spring. From ConnPIRG’s office in the basement of Mather Hall to the Multicultural Affairs Council’s plot at the Trinfo garden to composting on Crescent Street, student work toward a more sustainable community is touching all corners of campus.

Trinity’s ConnPIRG chapter is running a campaign this semester to ban single use polystyrene, commonly known as styrofoam. Polystyrene takes over 500 years to degrade and all polystyrene ever made is still around today. As part of their Zero Waste Campaign, ConnPIRG is working to lobby the state legislature to pass a bill banning polystyrene in Connecticut. They have a petition to generate more public support for the ban, are working on email lobbying, and will be scheduling meetings with state representatives via Zoom later in the semester. Students have sent 525 emails to the state legislator’s environmental committee, gathered over 350 petition signatures from Trinity, been quoted in local press coverage, and had two letters to the editor published in Connecticut newspapers.

“This campaign is entirely student-run. I give trainings to key students who are involved in a campaign on how to do things like write letters to the editor and those students then run events and train other students. The students write and implement the campaign plans. In the process, they are learning to be effective changemakers,” says Lars Dahl, the ConnPIRG campus organizer at Trinity. Cece Lagosmarino ‘24 is one of the campaign’s student leaders. “I’ve always been interested in sustainability and have tried to incorporate it into my life in any way I can,” writes Lagosmarino, “The Zero Waste Campaign has been a way for me to channel my love of the environment into real world action alongside like-minded peers, which is super cool!” To learn more about ConnPIRG’s Zero Waste campaign, visit https://connpirg.org/feature/ctp/zero-waste.

Others on campus are also working on new or continued sustainability projects. The Multicultural Affairs Council (MAC) is taking on a new initiative to care for two garden beds at the Trinfo community garden. The group, called the Garden Guardians, is aiming to grow their own food, enjoy the food together in community, and learn more about the cultural and historical significance of gardening in the cultures that MAC’s organizations represent. The MAC cultural houses on Vernon Street also received composting bins this month to help them contribute food scraps to the composting pile at Trinfo.

More composting is happening on the other side of campus from the Trinfo garden. Rose Rodriguez, Trinity’s Sustainability Coordinator, has been working to bring back the composting program with Blue Earth Compost at the Crescent Street Townhouses. Rodriguez says, “This year things had to be done a little differently to reduce in person interactions. Together with the Office of Community Service and Civic Engagement, Residential Life, the Green Campus Club, ConnPIRG, the Office of Sustainability, and Alex, the owner of Blue Earth, we were able to create a completely virtual program for this year.”

The Crescent Street Townhouse Program started in Fall of 2019 and was put on hold when the pandemic started. The program follows Blue Earth Compost’s residential model for food scrap collection. Each house receives a green five gallon bucket with a lid and liner. Each week a team member from Blue Earth comes by and picks up all the bins and leaves clean ones behind. The students receive a postcard at the beginning of the program detailing what can and cannot go in bins as well as their food scrap pick-up day. Thirteen houses signed up after the first virtual information session and more are expected to sign up at the next session. “We have high hopes for the program this year and believe it should be a success!” adds Rodriguez. 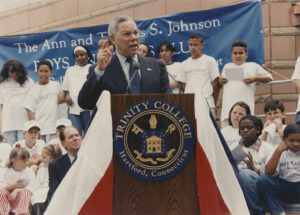 Reflecting on the 20th Anniversary of the Learning Corridor

The Learning Corridor opened in 2000, just over twenty years ago. Spearheaded by the...
Community Learning News 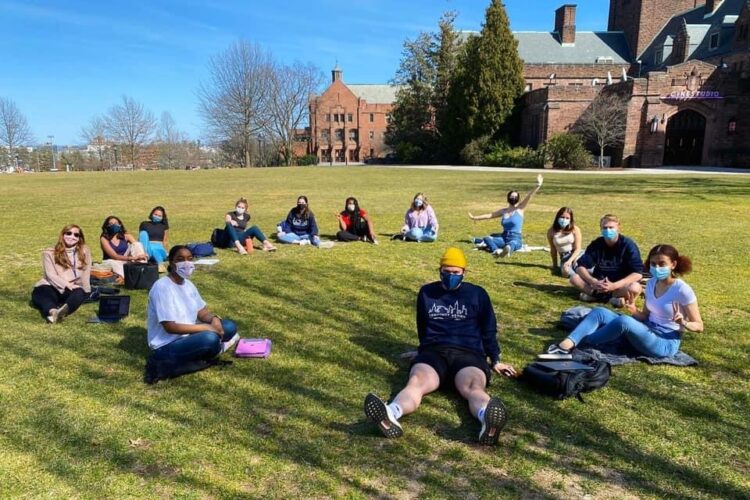 In the Community Action Gateway, 15 students come to Trinity in their first year...